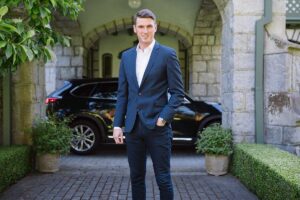 Throughout primary school and high school, he discovered and became highly engaged when it came to sports, particularly in hockey. After graduation, he even spent some time playing for teams in the British Columbia Hockey League and Western Hockey League.

Although aspiring to play hockey professionally, Callaghan decided not to put all of his eggs in one basket and simultaneously studied for a degree in sports management and business. He also ran several businesses during his time in university. After the difficult decision to abandon his ambitions of playing hockey in the National Hockey League, Callaghan O’Connor stayed close to the sport by taking a role as a media relations officer for the Vancouver Canucks. After that, he switched sports and became a media relations officer for the BC Lions football team, also based in Vancouver.

Eventually, Callaghan became inspired to try his hand at the real estate game. For the first five years of his new career as a real estate agent and investor, he mainly concentrated on working with commercial properties in Vancouver. However, upon moving back to Victoria, Callaghan opted to transition to working with residential properties as it allowed him to focus on his longtime interests of interior design and landscape artistry. After only a few years back in his hometown, Callaghan O’Connor has built up a successful, high-end residential real estate business. He plans on staying in Victoria, a city that he loves and views as a wonderful place to raise children, for quite some time.

What do you currently do at your company?

I am a real estate agent and investor. Among other things, I spend my days assisting my clients in search of properties. I operate primarily in the residential sector, though I do also still dabble in commercial and industrial real estate. I lease some of those properties, sell some of them, and hold on to some as long-term investments. I also negotiate purchases and sales on behalf of various clients.

What was the inspiration behind your business?

It’s a funny thing—my entire life, I thought I would work in the sports industry in some capacity. When I was younger, I thought I would become a professional hockey player, and later, when it seemed like that wouldn’t pan out, I thought that I’d spend my career in the front office. I didn’t harbor any illusions about remaining with one team for thirty years or anything like that, or even staying within any single league or sport, but I always thought I’d be involved in sports in some way. Then I found real estate, and I totally fell in love with it. Looking back, I suppose I’ve always been interested in landscaping and interior design, so it makes sense on some level. Anyhow, at this point, I can’t imagine doing anything else.

What defines your way of doing business?

I would like to think that integrity is the defining element to the way I conduct business. I do my best to treat people fairly and engage with them on a human level.

For me, personally, one of the biggest keys to keeping productive is getting seven or eight hours of sleep every night. I find that if I’m well rested, I just perform better at my job, as well as in every other aspect of life. Eating healthy is another key, and so is exercising. Just keeping myself in peak physical condition helps me more than anything else.

Tell us one long-term goal in your career.

I would love to, one day, purchase a professional rugby team. I’ve always admired the sport, and I used to play it pretty well when I was younger. Who knows if it’ll happen, but I think it’s a more realistic goal than owning a pro hockey team. Especially in Canada, where hockey is so popular, but rugby doesn’t carry as much cache. Anyhow, I just think that owning a team would be fun. My father was heavily involved with Rugby Canada so the passion runs down the family.

What would you tell your younger self?

No situation is either as bad as it seems or as good as it seems. Never struggle, but also never settle. Do your best to be consistent in your behaviour and your treatment of others, and realize that there will always be good times and not so good times. It’s all about how you deal with the present and plan for the future. If you can stay calm during life’s many challenges, everything will work out in the end.

What’s the most valuable lesson you’ve learned through the course of your career?

Build a strong daily routine based around health, happiness, and building wealth with integrity, and then use that as the foundation for all things. If you conduct yourself in such a way and do it consistently, eventually it will define your actions, your interactions, and your life overall.

What advice would you give to others aspiring to succeed in your field?

In the real estate game, there is no one piece of advice that will guarantee success. A lot of it comes down to simply recognizing a good opportunity when you see one and then snapping it up. However, some guidelines that have worked for me in the past are ‘don’t follow the crowd,’ ‘always stay informed of local trends,’ and ‘plan ahead for any eventuality.’

What are some of your favourite things to do outside of work?

On my days off you can normally find me on the water or the golf course.

What are a few influential books you’ve read and/or websites you keep up with that you’d recommend?

I recommend the book Grit: The Power of Passion and Perseverance by Angela Duckworth. The author is a psychologist, and she takes a deep dive into some ways that people find success in life. Her central thesis is that talent is not what guarantees success, but rather persistence is. She then goes on to explore the mindset of persistent people. The book is full of some genuinely interesting insights.